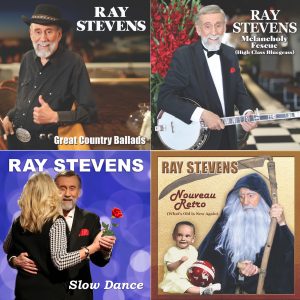 Nashville, Tenn. (February 18, 2021) – Country Music Hall of Fame member Ray Stevens may have recently turned 82 (on January 24th), but to him, age is just a number. Today the ever-energetic Stevens revealed he’s planning to release 4 brand new albums over the course of the next few months!
Stevens recently returned to Curb Records to bring his music to fans across the globe. The Grammy Award-winning singer, through Curb, will begin digitally dropping the new material this month with the release of “Great Country Ballads” on February 26th. Additional releases throughout the spring include “Melancholy Fescue (High Class Bluegrass)” on March 26th, “Slow Dance” on April 23rd, and “Nouveau Retro (What’s Old Is New Again)” on May 21st.
“I’ve been working in my recording studio for the last few years recording songs that I’ve heard all through my life,” explains Stevens. “These new recordings are the ‘soundtrack of my life,’ so to speak. I had a great time making these records and I hope others will enjoy them too.”
On “Great Country Ballads”, Stevens pays tribute to timeless songs of the genre in his own unique way, while on “Melancholy Fescue (High Class Bluegrass)”, he takes the idea he explored with “Misty” to new heights as he gives a bluegrass treatment to songs you’d never expect to be performed that way, and then adds symphonic strings and chorale. “Slow Dance” gives Stevens’ take on classic love songs of the yesteryear. With “Nouveau Retro (What’s Old Is New Again)”, he takes very familiar, favorite songs and presents them in a brand new, completely different way.
Stevens and Curb are also planning to release all 4 new albums in a special edition CD box set, “Iconic Songs of the 20th Century (The Soundtrack of Our Lives)”, available for purchase on June 18th. Ray is so excited to share these new recordings with you all!